The Verb English Grammar For Class 6

The Verb English Grammar For Class 6

A Verb is a word that expresses an action or tells something about a person laugh, climb, kill, drink, run, was or a thing.
Examples:
A Verb may consist of one, two or more words in a sentence.
In the following sentences, the Verbs are given in bold:
1. He was absent yesterday.
2. He goes to school daily.
3. Gita has finished her homework.
4. The school will have closed by then.
5. Our result will have been declared by tomorrow.
6. The boy told a lie.
7. Lions roar.
8. Boys fly kites.
9. Ashoka was a great king.
10. I feel sorry.
11. Mary put the cups on the table.
12. He sent a message to me.
In sentence 4, the Verb consists of three words.
In sentence 3, the Verb consists of two words.
In sentences 1, 2, 6, 7, 8, 9, 10, 11 and 12,the Verb has only one word.
In sentence 5, the Verb has four words.

Exercise 1
Underline the Verbs  in the following passage
The moon was full that night. Its brightness awakened me. I was restless. Suddenly, I heard a fearful scram My heart beat fast. What was it? Who was it? I listened tremblingly.
In the room above mine somebody was fighting for his life. “Help! Help! She’s killing me Rahul, Help!
Someone ran along the passage. Something fell heavily in the room above Then there was silence

KINDS OF VERBS
Verbs are of three kinds Transitive Verbs, Intransitive Verbs and Verbs of Incomplete Predication (or Linking Verbs).
Note the use of Verbs in the following sentences:
1. The boy filled the bucket with water.
2. Gas and coal are fuels
3. He is a good runner.
4. You appear well today.
5. People crowded to see the king.
6. He kneeled to pray
7. The soldiers freed the villagers.
8. That dog looks ferocious.
In sentences 1 and 7, the words ‘filled’ and ‘freed’ are the examples of Transitive Verbs.
The boy filled what? The answer is ‘bucket’. Bucket is the object of the verb ‘filled’. The soldiers freed what? The answer is the villagers’. The villagers are the object of the verb ‘freed’.
Thus, filled and freed are such words that require objects to make the sense complete. Such verbs are called Transitive Verbs.
In sentences 5 and 6, crowded and kneeled do not require any objects to make the sense complete. We do not ask the question: people crowded – what? or he kneeled – what? Such verbs are called Intransitive Verbs.
A verb that does not require an object to make sense complete is called an Intransitive Verb.
Carefully look at the following sentences:
1. The boy flew kites. (Transitive)
The bird flew away.  (Intransitive)
2. We grow roses in our garden. (Transitive)
These plants grow very fast. (Intransitive)
3. The sea robbers sank the ship. (Transitive)
The ship sank in the sea. (Intransitive)
4. The umpire stopped the game.  (Transitive)
The rain stopped long ago. (Intransitive)
5. She wrote a letter. (Transitive)
She writes well. (Intransitive)
Now, in sentences 2, 3, 4 and 8 on previous page, the verbs are, is, appear and looks are neither Transitive Verbs nor Intransitive Verbs. These are called Link or Linking Verbs. A transitive verb is followed by an object, whereas a Link Verb is followed by a complement.
In these sentences, fuels, runner, well and ferocious are all complements. A complement is related to the subject of the sentence. The link verb is called so because it links the subject with the complement. The complement describes or identifies the subject.
Verbs that complement are called Link Verbs.
These verbs are also called the Verbs of Incomplete Predication or Incomplete Verbs.
The number of Link Verbs is very small. The most commonly used Link Verb is be, which is used in various forms: am, is, are, was, were, being, been Other commonly used Link Verbs are: appear, see and become. In some contexts, the words like feel, grow, look, turn, smell, prove, come, fall, go, keep and sound are also used as Link Verbs.

AUXILIARY VERBS
An Auxiliary Verb is a helping verb. It helps to form the tense of the main verb. The chief auxiliary verbs are: to be (is, am, are, was, were, been, have, has, had, shall, will, would, can, could, do, does, did, may, might and must).
Examples:
1. I shall certainly help you.
2. She can go now.
3. They are singing a song.
4. You may come in. 5. She has applied for sick leave.
In the above sentences, shall, can, are, may, has are auxiliary verbs. They help the main verbs help, go, singing, come, applied to form the tense.

WEAK AND STRONG VERBS
Verbs are divided into two classes: Weak Verbs and Strong Verbs. Weak Verbs form their past tense by adding -ed, or –d or -t to the present tense.
For example,

Strong Verbs form their past tense merely by changing the inside vowels of the present tense. For example,

Carefully study the three forms of Verbs given below: 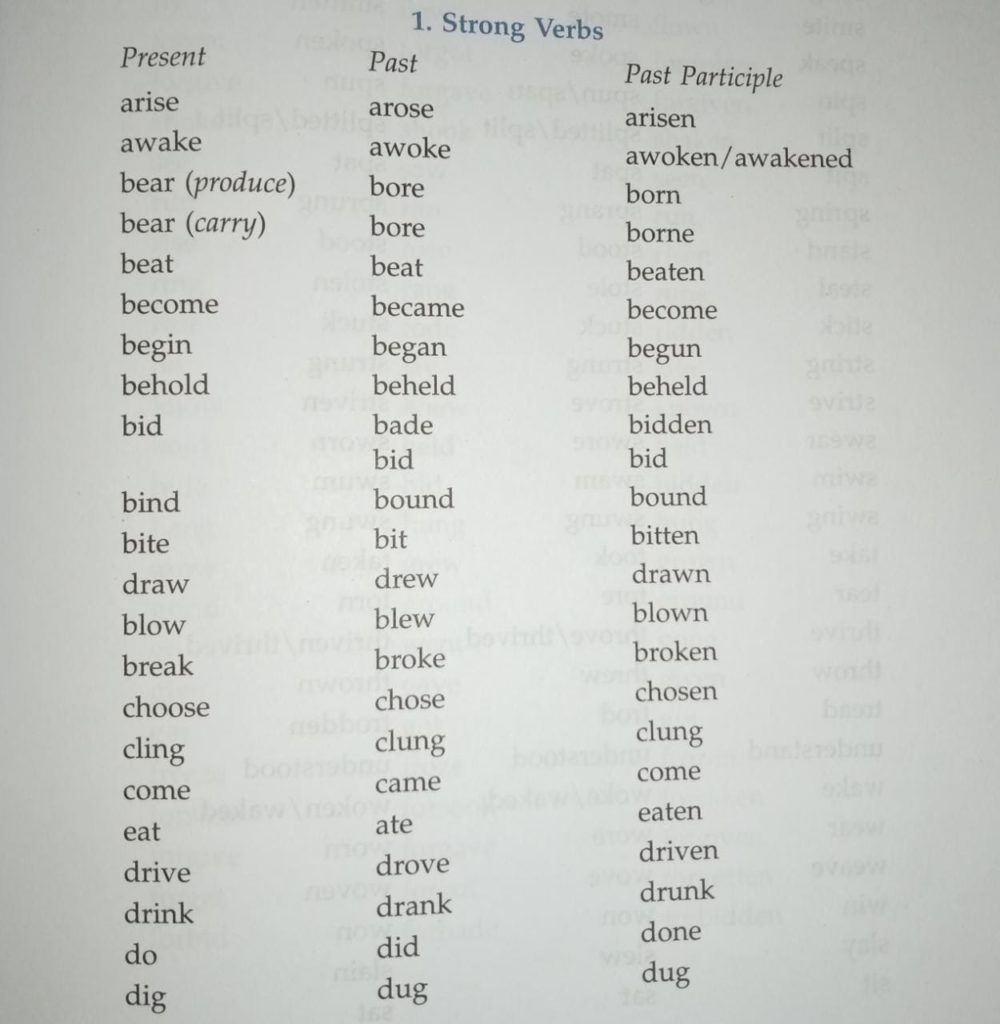 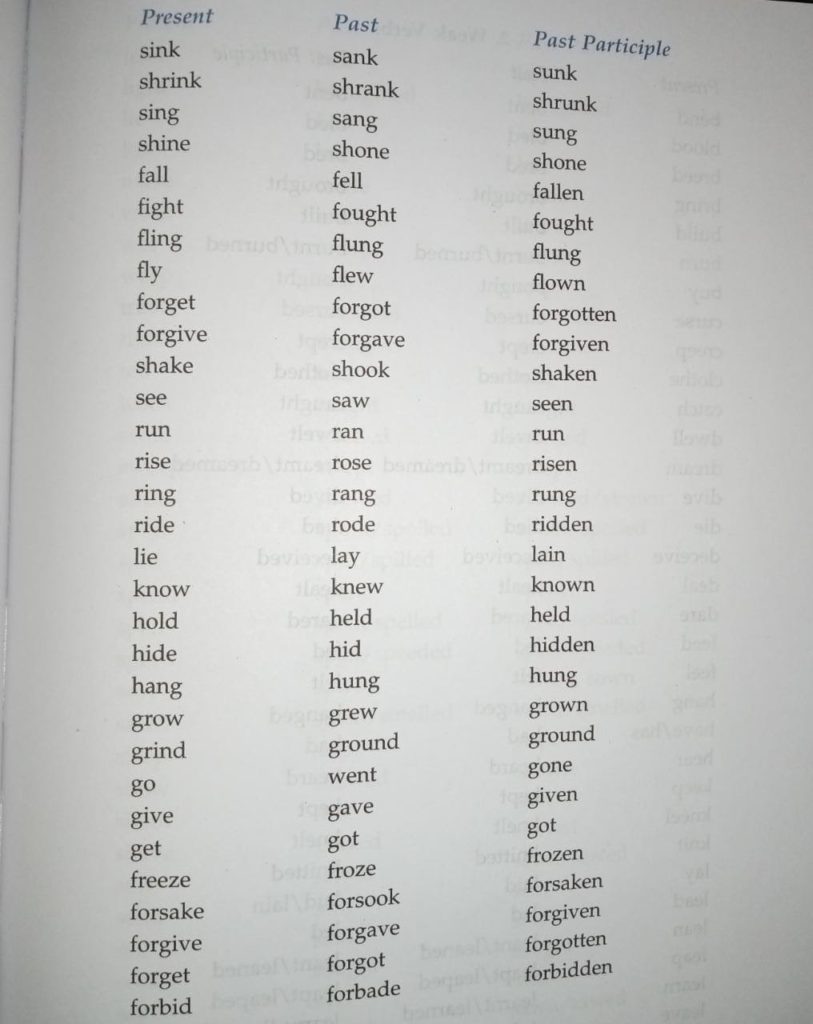 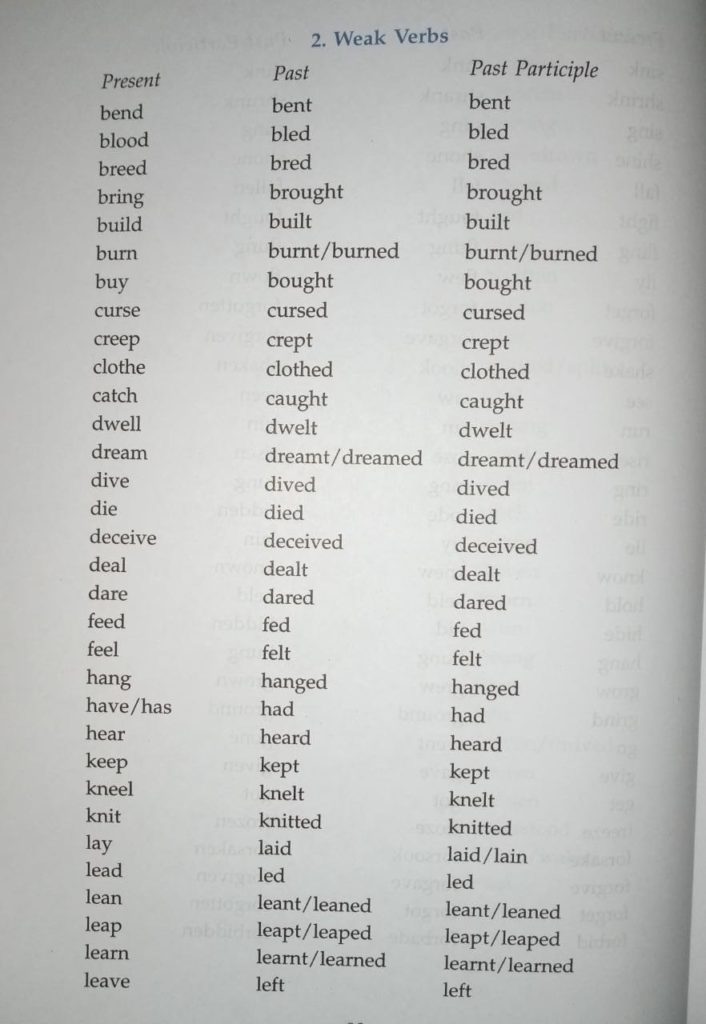 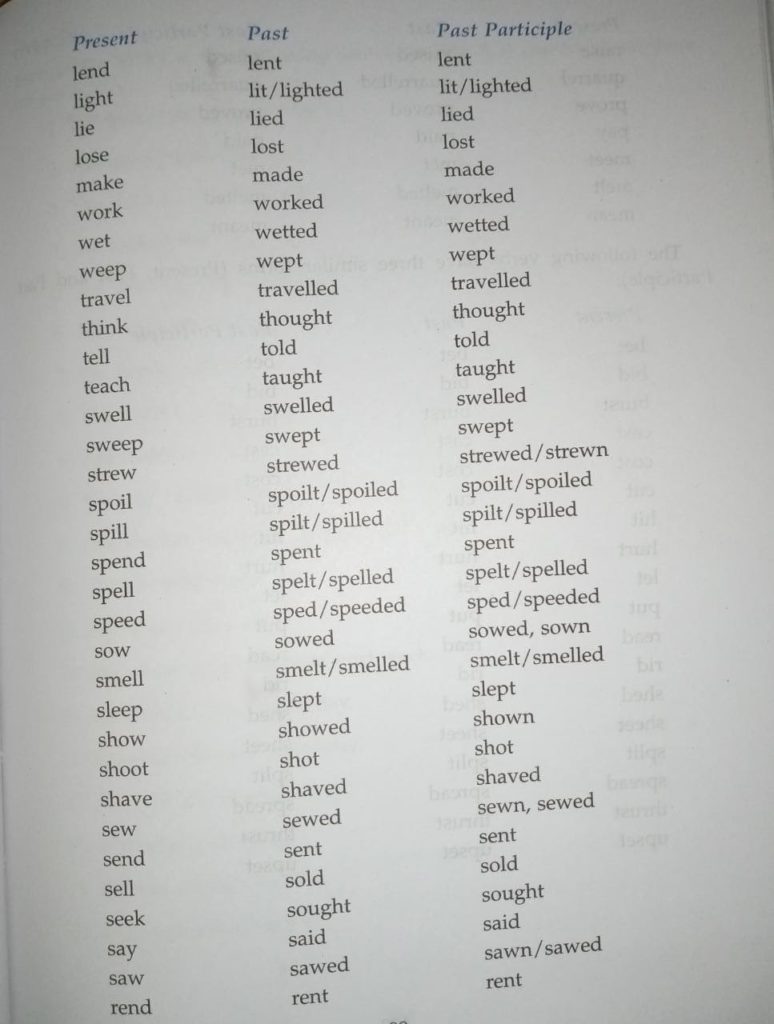 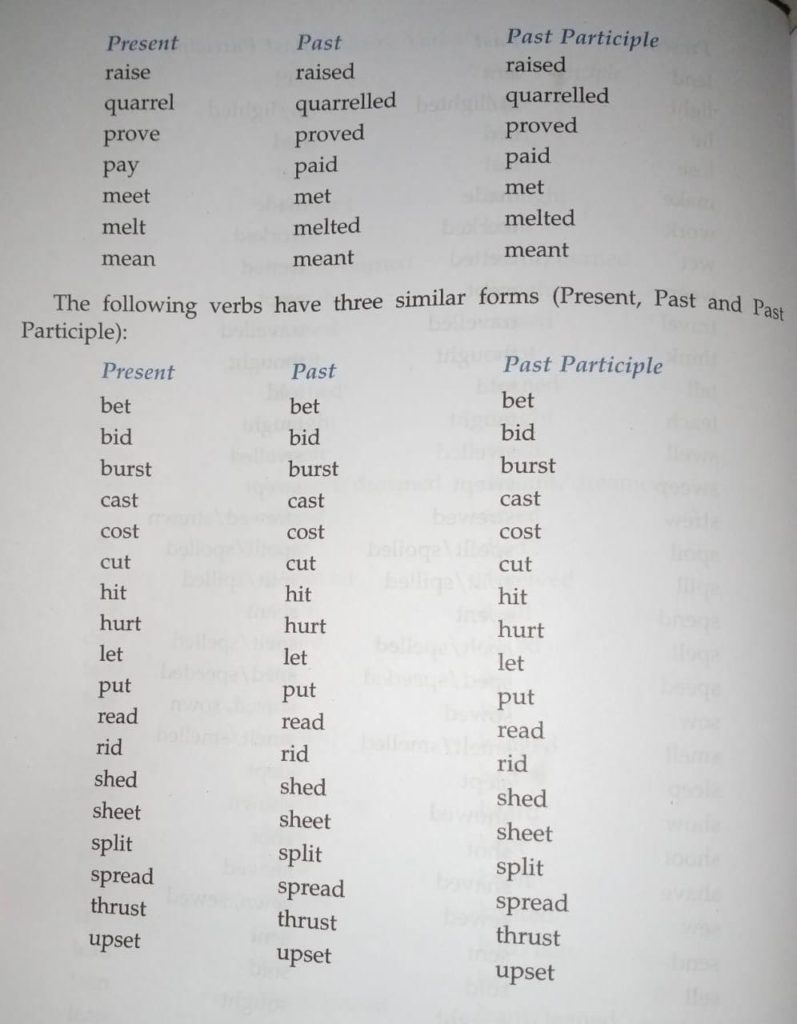 Exercise 3
Encircle the Auxiliary Verbs in the following sentences. Also, write the main verbs which these auxiliary verbs are helping. The first sentence has been done as an example.
1. The School will be closed for Diwali.  (closed)
2. She did not speak again.
3. He has been working for two hours.
4. She has been robbed.
5. I do not want your help.
6. They are having a big party in the evening.
7. We must stop at the red light.
8. Will you kindly send me the book?
9. I do not do my homework in the evening.
10. I have taken many photographs with my new camera.