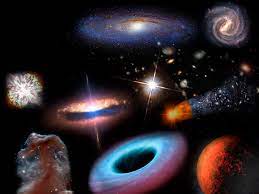 Galaxies are large systems of stars, dust and gas bound together by gravitational force. They are elliptical, spiral or irregular in shape. Our Sun is part of a spiral galan called the Milky Way.

2.What are active galaxies?

Some galaxies which have very luminous cores and which feed energy and material into the space are called active galaxies. Examples are radio galaxy, and seyfert galaxy.

3.How many different parts are there in a galaxy ?

The Milky Way is the Galaxy in which we live. It is a spiral shaped galaxy that
contains about 200 billion stars, including our Sun. It is about 100,000 light-years across and about 10,000 light-years thick.

2where is our Solar System located in the Milky Way?

Our Solar System is located about 26,000 light years from the centre of the Milky Way.

3.Are there any galaxies visible to the naked eye?

Three galaxies are visible to the naked eye, from Earth. The Andromeda Nebula can be seen in the skies in the Northern Hemisphere. The Large and the Small Magellanic Clouds are visible from the Southern HÃ©misphere.

1.Why do stars twinkle?

Stars twinkle because we look at them through thick layers of turbulent air in the Earth’s atmosphere that slightly distorts our view. The closer the star is to
the horizon, the more it appears to twinkle. This is because the light of stars near the horizon has to travel through more of the Earth’s to more distortion.
atmosphere than the light of stars overhead and so is subies

Stars are spinning balls of hot gases. Sun is the closest Star to the planet Earth.

3.Do stars move across the sky?

When we look at the sky at night, we see that the stars move across the sky from east to west. But, actually it is n the stars which are moving, but the Earth which spins around in space moving from west to east. This is w makes the stars appear to move in opposite direction.