Biography of JAMIE CHADWICK in Short

On August 24th, 2015, Jamie Chadwick won the British GT Championship, driving an Aston Martin V8 Vantage. The next morning, she put on her uniform and went to school. At seventeen, Jamie was the youngest ever winner and the first female to win the prestigious race.

Jamie started racing to go karts when she was thirteen. That led her to the Ginetta Junior Scholarship, where drivers are eliminated until only the winners remain. From there she earned a place at Aston Martin’s racing academy.

Racing is a predominantly male sport. Jamie says men make jokes about her being a woman driver but she doesn’t listen. Since winning the British GT Championship, she’s been racing in Formula Three, where the average top speed of the cars is 270 km. Now she’s dreaming about taking part in Formula One. No woman has raced in Formula One since Lella Lombardi in 1976 and Jamie’s hoping to be next. When one of the heads of Formula One claimed that women aren’t capable of driving the cars, Jamie knew what he was saying was nonsense and became even more determined to prove him wrong. If she gets there, she’ll be zooming around the track at over 350 km.

One of the biggest obstacles in racing is the cost. Most drivers come from wealthy families with spare money to pump into their careers. Although she has some sponsors, Jamie has to save every penny she can.

It’s also very demanding physically. Drivers have to train hard since they move at such speeds that extremely strong G force acts on their bodies, the same as for astronauts. Now Jamie trains in racing gyms but she used to have to make her helmet extremely heavy and lie on her bed with her head hanging off until her neck gave up.

Her coaches think she has what it takes. ‘She is an out and out racer said one.

Jamie’s showing everyone that being a girl makes absolutely no difference to how fast she can tear around a racetrack.

Biography of JESSICA COX in Short

Jessica had dreamed of flying from a young age. She would get frustrated with being different to everyone else, and found that imagining herself soaring through the sky above them all helped. What made her different? Jessica was born with a rare birth defect that means she has no arms.

She wore prosthetic arms because she felt she needed them to fit in. The arms were heavy and would get uncomfortable in the Arizona heat. At the age of fourteen, she made one of the biggest decisions of her life, and decided to stop wearing them. Instead, she embraced her difference, learning how to handle everyday tasks with her feet. She hasn’t looked back since.

Jessica drives, swims, dances, scuba dives, surfs, holds a degree in psychology, and has three black belts in taekwondo, which she won competing against people with both arms. She never felt disabled, she just knew she was differently abled.

She also learned to fly. As she was learning, new ways had to be found to enable her to do everything she needed to do in a plane, from buckling the seatbelt to starting the engine.

Jessica didn’t let it stop her. It took two instructors, with four planes, across three states, but she finally got her pilot’s license after three years of training. It had been a long journey.

In 2013 Jessica flew to Ethiopia. There, she met an eight-year-old boy called Tariku, who had also been born without arms. They are together with their feet and Tariku introduced Jessica to injera, a kind of pancake bread popular in Africa. Seeing her fly herself out of his village on a plane, he must have felt there was nothing in the world he wasn’t capable of

Jessica’s advice for people feeling isolated because of their disabilities?

‘Develop self-confidence in your special abilities because there are things you can offer the world that other people can’t’.

Biography of JOAN OF ARC in Short 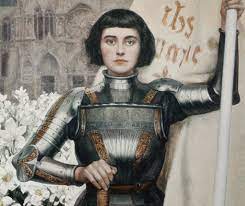 Joan grew up in the middle of The Hundred Years War, a long and bloody fight between the English and the French, for the control of France. Her family owned a farm, where Joan worked tending animals and sewing clothes.

At thirteen, while playing in the garden, Joan claimed to have visions. She said she saw saints who urged her to rise up, drive the English out of France, and crown Charles VII king in a place called Reims.

Joan traveled with a family friend to a town called Vaucouleurs and presented herself to a garrison commander who was a supporter of Charles.

I’ve been having visions, she explained. And I think I should lead the French army.

“OF course you do, the commander said, laughing.

But the people of the town supported her. They put pressure on the commander until he had no choice but to send Joan, along with an armed escort, to see the king. To keep from attracting attention, she cut her hair off and wore men’s clothes.

Charles was intrigued by the peasant girl who arrived at his court, asking to lead the French army into battle.

No one knows why, but he eve her control of some men.

Spirits among the French forces were low. They often last battle, even if they outnumbered the English armies fighting against them. This was exactly what was happening at Orleans a French city that was under heavy attack from the English.

When Joan rode in, everything changed. The people cheered. They raised their swords and gladly charged when she ordered them to attack The city was saved.

At Joan’s insistence, Charles went to Reims and was crowned king.

A year later, Joan was captured The English paid a huge amount of money for her because they knew how important she was to the French They burned her at the stake, some say her heart survived the fire.